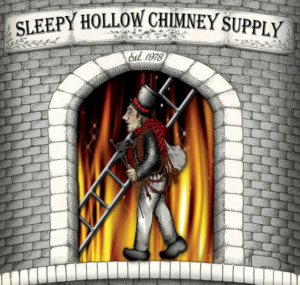 Sleepy Hollow Chimney was started in 1978 by Ray Colucci and Fred Schukal. Fred saw an ad in Mother Earth News magazine for an August West cleaning system and ordered it. Ray borrowed money from his mother and Sleepy Hollow began a Sweeping Company. They were located in Fred’s garage at his home in North Babylon when Fred decided to start a supply company. Fred saw a need for relining materials and accessories and decided to pursue it. As the business began to grow out of the garage space they moved to Babylon Village in 1979-1980. Andrew Schukal came on with Ray in the sweeping end of the business around that time. Fred saw a need for relining materials and Stove installation products that were not currently available from the existing distrubuters. This lead to the first of many innovative products that would defined Sleepy Hollow’s place as a superior chimney supply distrubuter. The Heavy Wall SuperFlex became the signature item in Sleepy Hollow’s catalog for many years. The SuperFlex solved the problem that over time Chimneys deteriorate and no longer fuction efficienlty or properly. Relining a chimney with SuperFlex eliminated the need to tear down and rebuild a masonry chimney and helped a homeowners appliances function more efficienlty. SuperFlex stands today as a bench mark product that began the rise of Sleepy Hollow as a major force behind the evolution of the chimney industry.

Sleepy Hollow continued to grow as more sweeps embraced the need for better products. As the sweeps began to get access to better products their industry as a whole became more interested in the European model of Chimney sweep guilds. European sweeps has access to better sweeping products that American did. Fred again saw a need and began to import European Sweeping products which upgraded the equipment that sweeps had available to more efficiently clean and service chimneys. To this day Sleepy Hollow still sells European sweeping products, which many sweeps prefer.

In 1980 Stephen joined Andrew and Ray in the sweeping portion of Sleepy Hollow. But did not stay very long. Steve left to serve our Country in the United States Air Force where he worked at the Kansas Titan Missile Base decommissioning Russian missiles from the Cold War as they were deactivated. He served in the Air Force until 1987 and then served in the Air National Guard, Rosyln Unit for 2 years after which he was Honorably discharged under the Palace-Chase act. While Steve was serving, Andrew became a Master Sweep. As a Master Sweep, Andy felt that each sweep the encountered, it was his goal to enrich or teach something to them. And he encountered many sweeps. He attended the National Chimney conventions, the New York State chimney sweep convention, ASHRAE, Hearth Products show, and any other outlet to meet other sweeps and further their education. He touched so many lives as he was the light of Sleepy Hollow. His joy, his love, his outgoing nature, his knowledge, his Excellence as a sweep all contributed to him never meeting a sweep that didn’t become a friend. Andrew was by no means a boring concentrated person. There is many a sweep that will tell you an adventure story or a story about the legendary suites that he would host at conventions where the sky was the limit on food, alcohol and friendship. When Andrew passed away in 1989 the heart of his family, Sleepy Hollow and the Chimney industry were all broken. He had touched so many lives in his short time here and left the world a better place for him having lived.

Andrew’s death changed the dynamic of Sleepy Hollow as well. Steve was now out of the Air Force and working for Sleepy Hollow. He had married and started a family. Steve brought his Sheet metal expertise to Sleepy Hollow and once again the innovations began to emerge. The Rigid Pipe was the next product to make its debut. Steve’s sheet metal shop began to produce this pipe and Chimney sweeps were happy to purchase it for applications that the SuperFlex was not suited for such as stove installations. Following closely behind the Rigid pipe was the inception of the Enviro Cap which is still a top seller. One of the largest innovations to come from the shop was the sheet metal Bellfires Rumford smoke dome. Bellfires refractory fireplaces, wholly owned by Sleepy Hollow, are the Gold standard for refractory fireplaces. Steve’s master sheet metal expertise in designing the smoke domes turned the refractory castings into a fully functioning fireplace retrofit or new construction product combined with the SuperFlex liner and Cerefoil technology. This product is uniquely Sleepy Hollow’s. It is trademarked and fully available to this day. Bellfires evolved the business of Sleepy Hollow and expanded its unique product line. Sleepy Hollow did not rest in its quest to find new and better products to bring to the Chimney sweep market. Fred saw a European stainless steel damper. He bought one to see what he could do to make it better. Fred and Steve worked together to create their Spider damper sold by Distrubuters. Its construction is a trade secret that makes it a quality choice for longevity of the damper. Still innovative to this day, Sleepy Hollow is proud to now offer a new flexible light weight smooth wall chimney liner called Super Flow which is sold with 2 part tees with snaps and which enables one person to install a liner solo, saving time and labor.

Steve prides himself on his custom sheet metal work which makes him stand out as a large part of the success of Sleepy Hollow. His ability to handle anything from a mailbox for his wife to the largest chase covers distinguishes him and elevates Sleepy Hollow to class all its own. They still retain their old world values of pride in product production and customer service that is a cut above. Fred and Steve are not done with their innovations. They are always on the lookout for new and better products to enhance the industry and elevate the quality of Chimney Sweeps work.